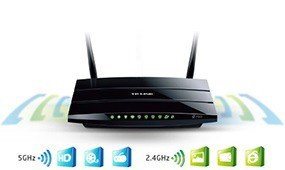 The N600 Dual Band Giagabit Wireless Router TL-WDR3600 broadcasts and receives both 2.4GHz and 5GHz signals concurrently at up to 300Mbps on each band. Like two wireless routers in one, the TL-WDR3600 permits you to run simple tasks such as e-mail and web browsing over the 2.4GHz band, even as the usage of bandwidth-intensive or latency-sensitive applications, such as streaming HD video or playing online games, over the less crowded 5GHz band, concurrently.

With a built-in Gigabit Ethernet Switch, the TL-WDR3600 provides you with a robust and extremely fast wired network. Moreover, its WAN to LAN throughput can achieve up to 800Mbps, allowing you to unleash the full potential of your network. You’ll be able to use the Ethernet ports for printer, NAS, TV, and other network devices so that users can all share those devices through the wireless or wired connection.

The router provides two USB 2.0 ports that can be used to share external devices among multiple users.

1. Share a Printer. It is common that multiple users share the same printer in the network. With the TL-WDR3600, You’ll be able to simply connect your printer to the USB port on the back of the router and print wirelessly.

2. Share Files & Media. Attach a storage device such as a flash drive or hard drive to the router, and users in the local network can all get access to the files saved in the drive. The router also has a built-in FTP server so that users can visit the storage device remotely.

Create a Guest Network for Visitors

To provide Internet access to visitors without revealing the password for your original network, You’ll be able to utilize the Guest Network function of this router. You are given the options to create a Wi-Fi network on either 2.4GHz or 5GHz. What’s more, You’ll be able to Keep watch over the bandwidth, schedule, and local network accessibility of the guest network. This feature is reasonably useful for small offices, shops, and other places where a separate Wi-Fi network needs to be provided to visitors. 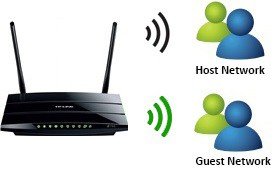 Network Management at Your Fingertips with TP-LINK Tether App

TP-LINK’s Tether App provides the easiest way to access, manage and share your router’s resources with your iOS and Android devices. From setup, to parental Keep watch over, to media sharing, Tether provides a simple, intuitive user interface to see what the status of your router is, who’s online and what their privileges are. Learn more details on TP-LINK’s website.

With Quality of Service (QoS), You’ll be able to Keep watch over how much bandwidth is allocated to each user. This ensures optimum utilization of bandwidth by controlling congestion and preventing bandwidth abuse. This way users of a small network receive committed and specific bandwidth, preventing non-critical applications from degrading network performance.

The TL-WDR3600 comes with a Quick Setup feature in its web management page that leads you through a step by step process to set up your router. On the other hand, You’ll be able to use the Tether app to do the setup. Either way, you don’t want to install any software or use a CD to finish the setup. Within minutes, your router will be up and running.

There are no reviews yet.